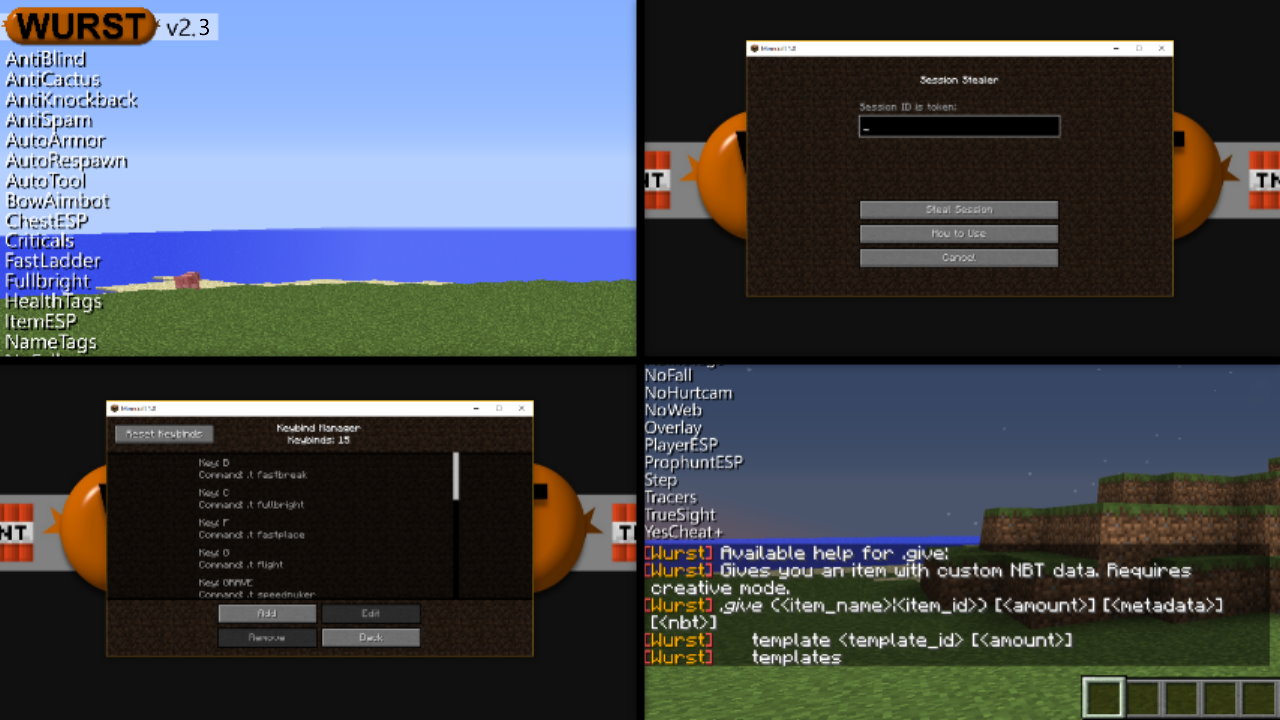 The Session Stealer basically allows you to temporarily steal other people’s accounts. You can’t change their password, but you can use their account on any server, which is especially useful for griefing. You can basically steal the session of a server admin, use their account to /op yourself and then grief the entire server.

Since this is a fairly new exploit, there have only been a few private/paid clients out there that came with this feature, and I’m pretty sure that Wurst is the very first public client having it. But I know by experience that being the first one isn’t what matters, it’s being the best one. So I made sure that this Session Stealer is as simple and easy to use as possible. You literally only need to paste in the session ID and it will give you the session. And if something is wrong with the session ID, it will tell you what that is and how to fix it.

It was very important for me to make sure that this Session Stealer is easy to use, as I still remember the time when the AuthMe Cracker (Wurst’s first Force OP hack ever) was a big thing and I got flooded with e-mails from people not understanding how to use it. I don’t know if this will ever grow as big as the AuthMe Cracker, but it might. There’s always a chance. And that’s enough of a reason to make sure that it’s as good and high-quality as it possibly can.

This feature was originally made by one of my contributors in Pull Request #1848 and then I improved the easy-to-use-ness of it and wrote the tutorial, as mentioned above.

This command allows you to cheat yourself any item you want in Creative mode, just like the /give command (and yes, it also works with items that have NBT data). The only difference in .give is that server admins can’t block it, and that’s what makes it so cool. It doesn’t even matter what plugins and Minecraft version the server has, this command always works (although now that I said it, Spigot is probably gonna do something).

Another cool thing that this command has is item templates. Item templates are pre-configured items that you can give yourself at any time. They provide a pretty good example of what’s possible with this command and how Minecraft has way more items than the ones you can get from the Creative Mode menu.

This feature was made by a contributor in Pull Request #1823.

As many of you know, I’ve struggled with the fonts for a looong time, but now they are finally fixed! Look how smooth that is:

It turned out that the resolution of the fonts was too low. By simply doubling the resolution, they now look nice and HD just like they should.

Regarding the feedback that I collected in the previous post (and I’ll definitely do that again at some point), a lot of people wanted me to improve the GUI. I’m not quite sure how they meant this, as the GUI is a very broad thing, but I’m pretty sure that they’ll be happy about this improvement.

I also have some ideas for more “better GUI” improvements. Watch for those in a future update.

Oh, and the bug with the fonts still not looking quite right in Wurst 2.2 was reported in Issue #1826.

Even very long ago I received messages from people saying that they deleted their ClickGUI keybind and couldn’t get it back. At first I didn’t have a clue what they meant by that, as you don’t need the ClickGUI in order to change a keybind. But now I got it and I fixed it: These people deleted their ClickGUI keybind without knowing that it was set to .t clickgui and when they tried to make a new keybind for it, they didn’t know what to type in there.

The simple solution to this was to add a Reset Keybinds button that will bring the default keybinds back. I could have added this earlier if they had been more clear about the problem, but let’s not blame them. I’m happy that it’s resolved now.