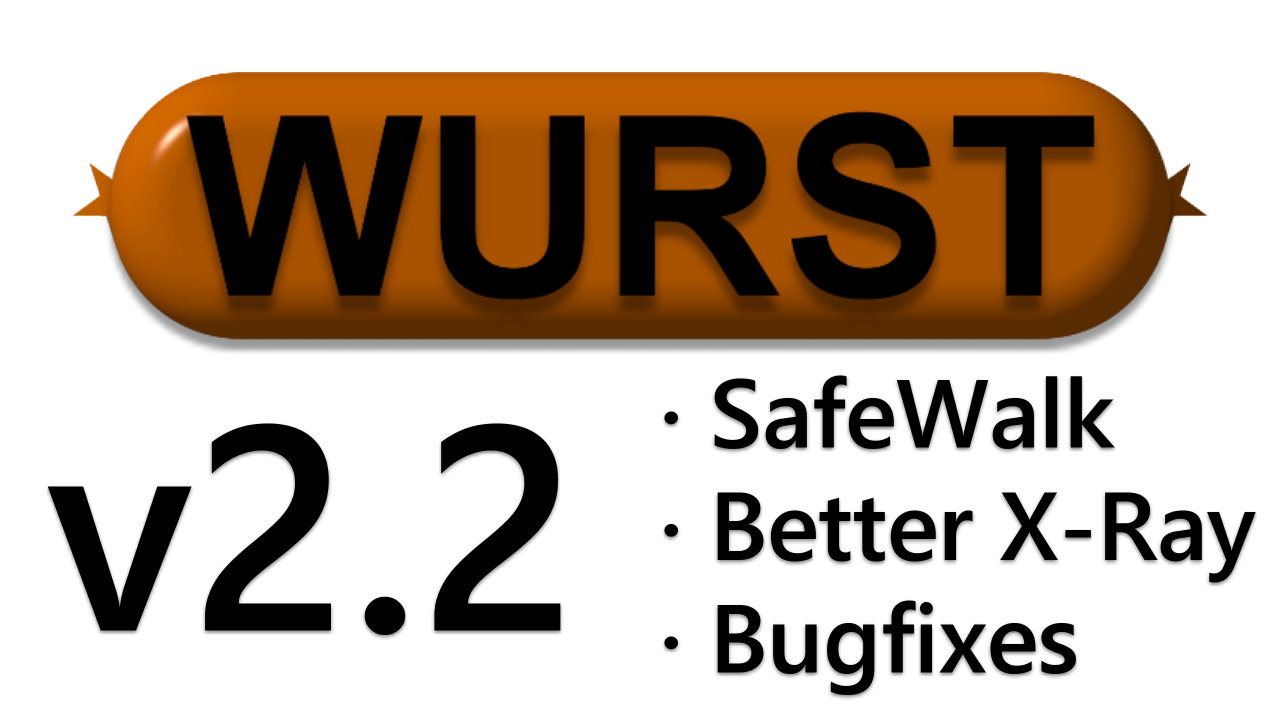 The main focus of Wurst 2.2 is to improve the user experience and quality of Wurst. That’s why we got lots of fixes and improvements in this update.

A normal Minecrafter would often sneak while building to protect them from falling down an edge. A Wurst user can now get the same falling protection without being slowed down by using SafeWalk instead of sneaking. You can still move at the normal walking speed and even sprint normally. Additionally, SafeWalk bypassed NoCheat+ completely and is pretty hard to see for other players.

Those of you who have been around since the Minecraft 1.7.X version of Wurst might remember that the release of Minecraft 1.8 did quite a bit of damage to X-Ray and that we’ve had a very hard time fixing this damage.

As you can see in the picture, X-Ray will now show a lot more of the ores than it did before. The reason why it didn’t show these ores before is because Minecraft 1.8’s improved rendering system prevented them from showing up. But after a lot of experiments, a lot of research and a lot of failure, we have finally managed to get rid of this bug.

Another bug that we fixed is transparent blocks, such as leaves, half slabs, etc. always showing up on X-Ray. This bug wasn’t nearly as tough to fix as the first one, but I’m still very happy to see that we got rid of it.

If you tried to open the Resource Packs screen in Wurst 2.1, you got a crash. And if you tried to find the crash in the logs, the logs weren’t there. That was quite a nasty combination of bugs but luckily, it was easy to fix because these two bugs were both caused by the same thing: the compiler. More specifically, the compiler forgetting to put the assets where they need to go.

It turns out that you can’t use Resource Packs without the default pack image and that the logs won’t be saved without the Log4j config. Interesting, but fixed.

Some more random improvements that we made: We moved the Phase and Invisibility mods into the Exploits category and made the fonts look prettier. Small things, but they do make a differnce and that’s what counts.

AutoArmor will no longer do weird things with containers and AutoMine will no longer output true and false into the console. Like I said, we’re really getting into the small things now, but it still makes a difference.