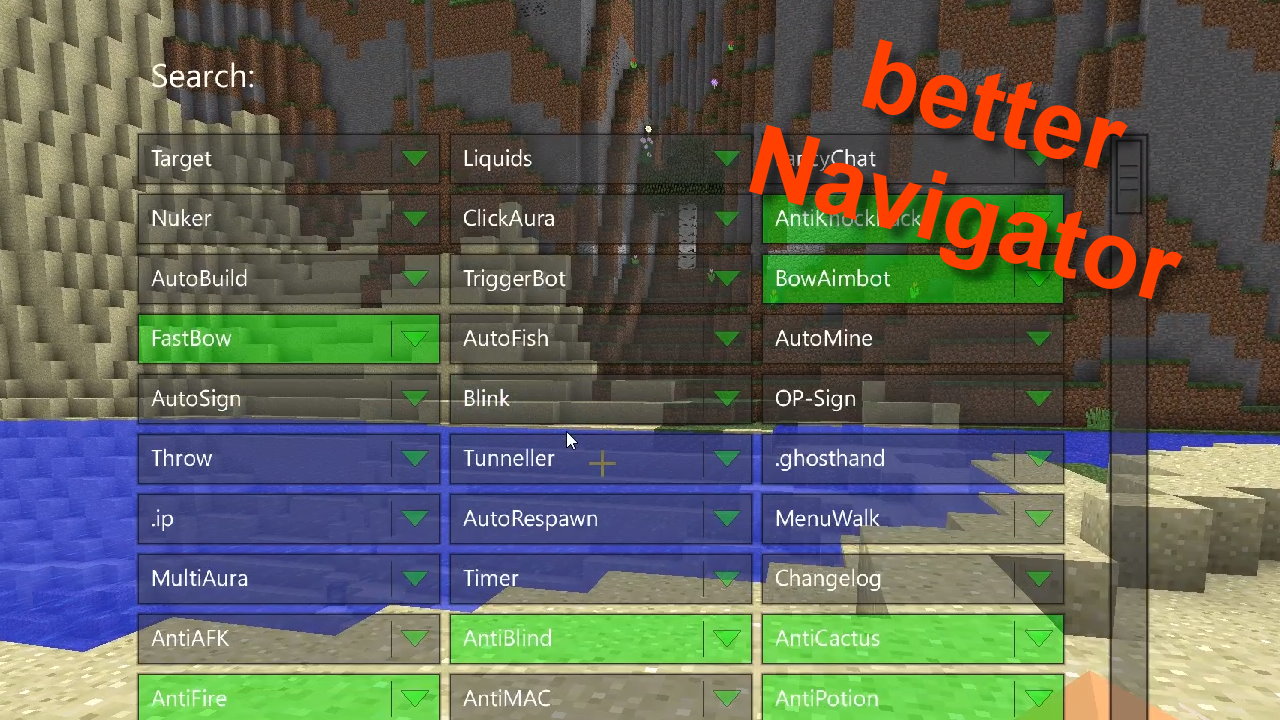 Navigator has been improved in several ways since Wurst 2.13. The biggest and most noticeable change is that you will no longer need to shift-click or middle-click on a feature’s button in order to run its primary action.

Instead, the new Navigator lets you do that with a simple left click. There’s also an arrow on the right side of each button that allows you to open that feature’s Navigator page (that’s what left-clicking the button used to do in Wurst 2.13).

Below I’ve put together a small table to show what the different kinds of clicks will do:

Furthermore, Navigator can now add keybinds for changing various settings. For instance, you can make keybinds to cycle through the different Nuker modes, to toggle the “Teams” option in Target or to adjust the Flight speed.

This was made possible by adding three new commands that can be keybinded and have direct access to the settings:

Looks complicated, but it really isn’t since Navigator will do most of this stuff automatically. Just go to the Navigator page of the feature that has the setting (e.g. Flight), click the “+” button in the Keybinds section and select what the keybind should do (e.g. “Increase Flight Speed”). Then select a key to trigger the keybind and you’re all set.

I’ve already covered three of the new commands in the section above, but we still got two more to go! The first one is called .modify. This command allows you to modify the NBT data and metadata of items. It requires creative mode, but doesn’t require OP.

Changing the metadata of items allows you to do things like:

Changing the NBT data of items givs you options like:

The second new command is called .copyitem and it allows you to copy items that other people are holding or wearing. Again, it requires creative mode but not OP.

This command can be nice for trolling people on creative servers, as it copies the items with all of their damage values and custom NBT data. So if someone else has an enchanted diamond sword or a custom named chestplate, you can get an exact copy of it and pretend that you stole it from them.

AntiKnockback now has a Strength slider that lets you configure how much or how little of the knockback should be blocked out. It is set to 100% by default, but you can change it to something lower to make it look less suspicious.

We also added a tutorial button for .say. If you haven’t seen that tutorial yet, you can find it right here.

MenuWalk will no longer prevent you from respawning, no matter if AutoRespawn is turned on or off. We also fixed the Navigator button (in Navigator) sometimes being green.